Roof ventilation has been debated for ages. Building codes often require it, but it’s one of those things that can sometimes be overlooked or misunderstood. What’s more, the relationship between insulation and ventilation — and how both work together to provide your customers with the comfortable indoor environment they expect — shouldn’t be underrated.

The Purpose of Ventilation

The reasons to vent a roof depend on the climate. Without ventilation in hot climates, solar heat is trapped in the attic and makes the air-conditioning system work harder to keep the building comfortable. In climates with high humidity, a good roof vent system can prevent mold-causing moisture buildup in the attic. In colder climates, roof vents help keep the temperature of the roof deck as close as possible to the outside temperature, which helps prevent ice damming from thawing snow. If the climate has a mix of hot, cold or humid, then the purpose of ventilation can change with the season. Let’s take a minute to look at ice damming.

An ice dam is a build-up of ice that collects on the roof eaves of a heated building. The heat from the building melts the upper part of the snowpack, which refreezes when it reaches the cold overhang. As more snow thaws, the water is trapped behind the dam and can find its way under the shingles or between metal panels into the building. The intruding water can cause mold or rot in the attic and/or walls. While it is a common cause, ice dams are not the only way moisture can enter a roof. 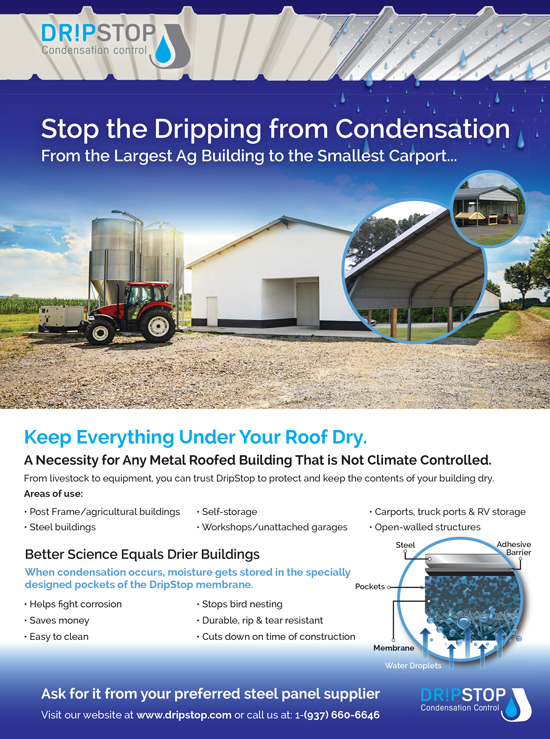 Condensation is seen almost any time hot air and cold air meet. Though it may be less noticeable with shingle roofs, it can be especially prevalent on metal roofs, which change temperature much faster than other roofing materials. Condensation can happen in warm, cold or humid climates. Condensation is most common in heated spaces or in unconditioned spaces with animals. Some animal barns have so much moisture that the condensate drips in the morning like a gentle rain. In a barn, that might not seem like a big deal, but it is a serious problem in a residence. If left unchecked, the excess moisture would likely cause dangerous mold, rot, and other structural damage.

A good ventilation system can help lessen the rate of condensation because the airflow is carrying the moisture out of the building. But ventilation alone doesn’t always solve the problem.

It’s common knowledge that insulation is great for improving energy efficiency. It keeps conditioned air from leaking into the attic or unconditioned air from passing through to the living space. Without proper insulation in hot climates, your customers are almost certainly going to be wasting money on higher energy bills as heat beating down on the roof radiates into the attic and transfers into the living space. This heat transfer makes air conditioning units work harder to keep the building comfortable.

In colder climates, insulation keeps heat from being lost through the ceiling and keeps the cold air out. In either climate or a mixed climate, proper insulation combined with good ventilation can mean huge savings on your customers’ energy bills. But, without insulation, air from the conditioned space below can cause condensation on the underside of the roof deck.

To prevent condensation under the roof deck, the entire surface dividing the conditioned space from the unconditioned space must be tightly sealed. For example, if there are any gaps between joists, if the recessed lighting canisters are not completely sealed, or if the insulation doesn’t go all the way to the top plate, energy loss is guaranteed and ice dams and significant amounts of condensation can occur. 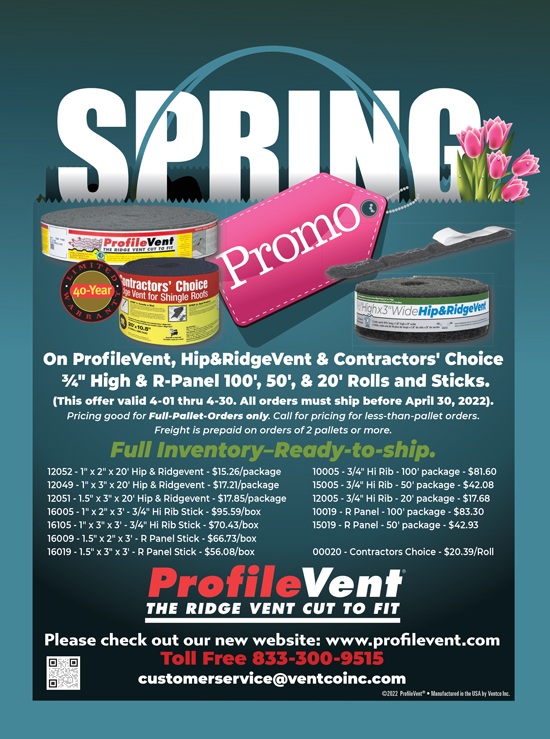 Consider this example: A roofer who had paid meticulous attention to detail when retrofitting an existing home with a metal roof was called back after the homeowner reported their roof was leaking. The roofer was confused as to why there would be a problem; he followed the panel manufacturer’s guidelines, he installed ice and water shield, and a ventilation system that included a ridge vent and vented soffits. Upon inspecting the attic, he discovered condensation along the back of the ice and water shield, which ran down the edge of the valley until it dripped to the ceiling below. He also discovered there was no insulation between the living space and the attic. The condensation was caused by warm air from the living space passing through the uninsulated attic to the roof deck. The only way to stop the condensation problem was to completely seal the attic floor and make sure it is well insulated all the way to the top plate of the walls. After convincing the homeowners that insulation was the solution (which took no small amount of effort), the roofer pulled up the floorboards and thoroughly insulated the space between the attic and the living space.

If the roofer would have included a trip through the attic during his first visit, when he was quoting the job, he could have spotted the lack of insulation and predicted the condensation problem. He could have guided the homeowners to a solution that worked for their home without the frustration and embarrassment of the callback.

Understanding how insulation and ventilation work together for a comfortable indoor environment will help you spot potential problems before they turn into callbacks. GSCB

About Snap-Z: In 2015, the Snap-Z ridge vent became an official product line of Glick Metals. Since then, different sizes have been designed, but the main design remains the same – a durable standing seam roof vent that makes metal roofing ventilation easier.

The Snap-Z and Glick Metal team remain focused on one thing: Following the commands of Jesus Christ by treating every roofer and distributor the way they would want to be treated.

What is a good ratio of roof ventilation intake vs. exhaust?

Slightly more eave ventilation than ridge ventilation is recommended to create negative pressure that will always be pulling the air up and out of the attic.

And finally, divide that by the NFVA-per-ft. rating of the ventilation product you are using to find the linear ft. of intake and exhaust that is needed. Many roof ventilation manufacturers have online calculators that can help with these calculations.

Can you use ridge vents without soffit vents?

A ridge vent without a soffit vent doesn’t work. Stale, moisture-laden air escapes through the ridge vent. As it escapes, it pulls fresh air in through the soffit vents. If there are no soffit vents, air is pulled from the conditioned space, which means wasted energy and the potential for ice damming and condensation.

What about uninsulated pole barns?

Many post-frame buildings used for storage or agricultural structures are not insulated. There is often a temperature difference between the outside and inside of the building, especially in the morning and evening. And, as a rule of thumb, whenever you have temperature differences, you’re going to have moisture – often in the form of condensation on the underside of the roof.

A good ventilation system can help, but it’s most effective when combined with a vapor barrier.

Beat the Heat With Foil Insulation